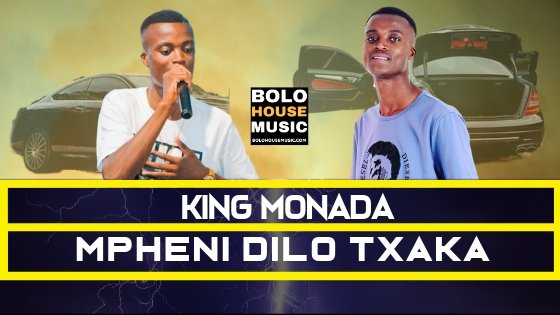 King Monada Mpheni Dilo Txaka mp3 song finally out as a free mp3 download. Mpheni Dilo Txaka is the sixth song by King Monada in 2019.
The song has raised many questions, regarding the message that it delivers. Moreover, Following the saga that occurred midnight of 2018.

The song is named " Mpheni Dilo Txaka" which translates to " Give me what belongs to me" in English. Many have asked on the social media
about what Khutso was implying and who is he directing the message to. This is a controversial song and a cry to a friend who is now an enemy.

The fans have made many comments on Facebook and Youtube after they have listened to the promotional version of Mpheni Dilo Txaka. Some
believed the song is directed to Thobela FM for robbing King Monada of the title for summer song of the year. This is the same award that was
won by Master KG of Open Mic Records.

The song follows the rhythm and instrumentals of his 2018 hit song Sekorokoro. Whenever King Monada releases a slow jam, he makes sure it will stick
to his fans. He does this by aligning his message and instrument to work in harmony. In addition, Mpheni Dilo Txaka tells the story of a person who is tired of people
who take advantage of him or her.

Mpheni dilo txaka is quickly taking social media by storm. Moreover, everyone seems to be looking forward to downloading mpheni dilo txaka mp3 song. Is this another break for King Monada to reclaim his fame as he did with Malwedhe in 2018. We do not have all the answers but the reaction of mpheni dilo txaka by monada is growing very fast.

King Monada Mpheni dilo txaka lyrics can be found on the video on our youtube channel below. Enjoy it and do not forget to subscribe.