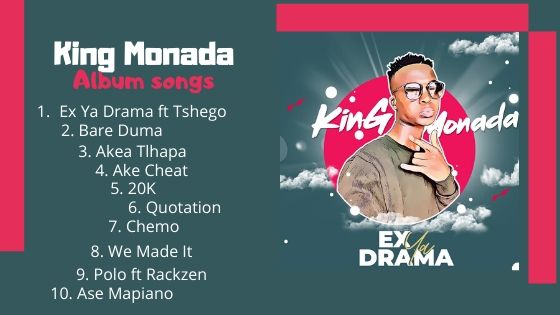 King Monada Album has finally dropped in 2020. The official name of this collection is called Ex Ya Drama. The album is comprised of 10 amazing songs with different flavors.  Ex Ya Drama Album features big names like Dr Rackzen, Tshego, King Chyma and Morosto.

Ex Ya Drama talks about a man or woman who is fed up with his ex-lover because of his/her dramatic behavior. Apparently the ex-lover came for back to ask for love back, however, he makes it clear that he cant go back to her/him due to their bad history.

Bare Duma talks about a couple that is going through difficulties. in fact, there are people who are fighting them only because they are jealous. what makes it worse is that people who is fighting are not even working.

Akea Tlhapa talks about a person who loves music a lot. He left his place and go to a club without bathing. As a result, people are chasing him from the club. So, he defends himself that he is not the only one who didn’t bath. Eventually, he asks for forgiveness for neglecting to bath.

Akea Cheat relates to a man who is proud of never cheating in his life. However, his story is not true because some people are asking him why he has children out of wedlock if he never cheats. He later relates that all people cheat and if not they should raise their hands. In short, the song is saying no one is perfect.

20K is an interesting song about a rich person who is bragging to his mates about money. In fact, he tells them that he doesnt have any money and he is left with only 20K. This is an irony because 20k is a lot of money.

Quotation is about a man who is happy in his love relationship. as a result, he is asking the family of his in-laws for a quotation for lobola. In fact, he emphasizes that people have tried to make them fight but they failed because their love is strong.

Chemo is one of the songs that carry a lot of meanings or interpretations on the album. According to us, this song is talking about a man who wanted a woman. when she finally gives him the opportunity of a relationship, he doesn’t satisfy her in bed. As a result, she is complaining due to his laziness in bed.

We made it is a song of celebration. It is about a couple who has gone through relationship difficulties and win at the end. They are thankful for their perseverance in difficult times when friends tried to ruin their relationship. As a result, they are now going to get married.

Ase Mapiano is an instrumental song. The name is meant to say, don’t assume that the song is in the genre of amapiano because it is not. it sounds like a mix of bolo house and amapiano genre in one song.